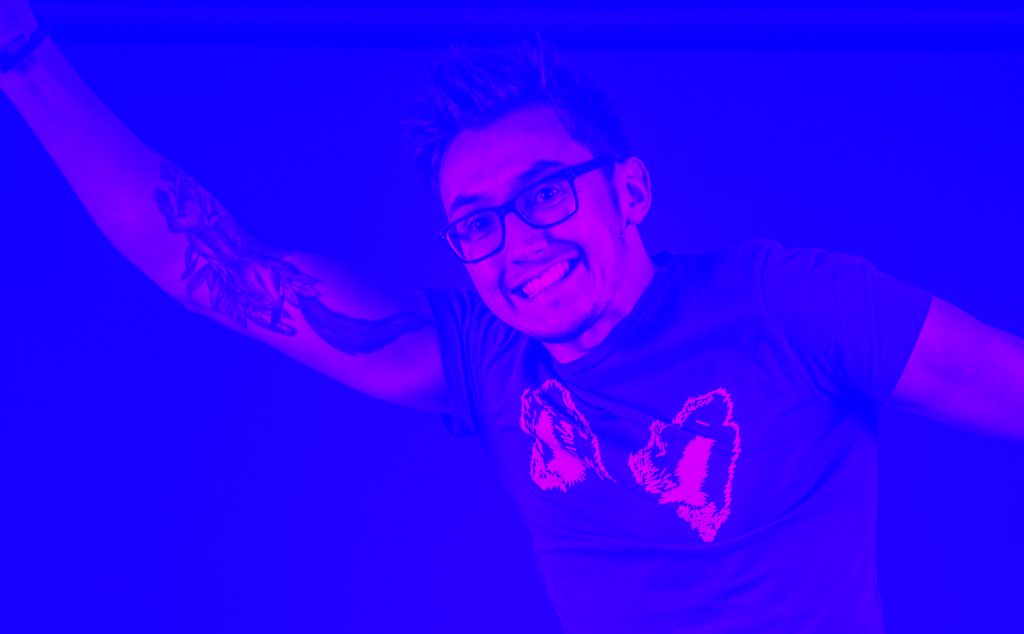 Henry never liked school, he likes to have calm and green surrounding him when he is not at the studio. He likes the smell of the seasons, especially in early spring. He’s a big fan of pop culture and music, he always has his headphones on. And just like many creative people, he is an overthinker. Something that pushes him forward and at the same time puts a lot of pressure on him. He is a son, but also a dad, and a boyfriend. Henry is proud of what the whole team achieved with Dogstudio so far, and at the same time, he is also endlessly unsatisfied. “I am always convinced we can do better. “

When and how did you start your own studio?

I actually didn’t start the studio, I joined as a partner now 8 years ago. I joined Dogstudio after selling my shares and leaving Epic, another digital studio from Belgium. To be fair, I never really wanted to manage and I’m still learning today. The interesting challenge with Dogstudio lied in our ecosystem from back then: KIKK Festival had just been created and I had a “carte blanche” in terms of design and international business development. That’s what I needed at that time of my life. To be challenged.

When did you come up with the idea to start your own creative conference KIKK festival?

It came from two of my partners Gilles and Gaetan, and the story’s pretty simple: they were both tired of having to travel to random places of the world to discover artists, watch conferences and meet like-minded people. On their way back from another famous design festival they decided to start a new conference project. KIKK Festival was born and the rest is history. Well, not really history, but the festival has been in constant growth for its first 8 years of existence. By the way, it’s going to be happening between the 30th of October and the 3rd of November, so…join? (www.kikk.be for subscriptions)

At what point did you decide to open a second studio in Chicago with Dogstudio?

The real question is: when did we decide to fully develop on the international level. Personally, I would say definitely 10 years now. For Dogstudio, it all came as part of a long process of projects and clients escalation. We used to have a long list of local clients, mainly from the public sector. I joined the company with this craving for bigger clients, private sector, bigger challenges, and get to, one day, say “look, we exist on the world map of digital, although we weren’t born in Paris, New York, London or San Francisco”.

Chicago is the logical result of two things. First, the awards we started to gather from platforms such as Awwwards and FWA which gave us a lot of much-needed visibility. I mean, we’re confident in the work in itself, but if a tree falls in the forest and no one is there, does it still make a sound? We needed people to raid the damn forest.

Then, it’s also the result of successful projects leading to landing bigger projects. From KIKK to Dragone, from Dragone to Microsoft, from Microsoft to the Museum of Science and Industry of Chicago, from years of different kind of projects to finally landing gigs for the likes of American Airlines, Adobe, and so on. Then there’s luck and lack thereof too.

The Chicago office is now two years old and experiencing an exceptional year. Let’s see where this goes.

What is your personal growth path?

Wow, fishing for long answers. My growth path has been… complicated. Let’s see.

I hated school. It’s too slow, so I started drawing to ease the boredom. I never stopped. And at the age of 17, I’m petrified, I didn’t know what to study in college or university… My brother studied computer science while I am lost; so why not do the same? My parents pushed me to go to university. I spend a year in computer science where I met a lot of new friends. After a while, I started to get bored with mathematics. It was easy and fun at first. I definitely felt I’m not cut for that kind of work. In the meantime, I kept drawing in class.

When I watched the first Lord of the Rings movie, I was blown away. I loved the books so much as a kid and rediscovered them in the digital era. So I decided I wanted to be a 3D artist. Went to study computer graphics and 3D modelling. I loved it so much, however, I was just a scared kid not ready to leave my country and go abroad. At that time there were no job offers in 3D around here. So I took a job in a marketing agency. I didn’t like to do web design, but it paid the bills. Learned new stuff every day and started to enjoy what I was doing a bit more. The web evolved and the technologies and possibilities changed too.

At my first place of work my boss repeatedly screamed at me. Out of frustration, for no reason, so I told him ‘I quit’. Afterwards, he asked me to stay. I didn’t. The next 3 years were in a bigger agency called Globule Bleu. I loved my colleagues over there, some of them are still among my best friends. We had so much fun and at the same time, we did good work. I became Associate Creative Director in at that same agency. After a while, I left to become a partner at Epic. We had an insane amount of talent in house, and everything’s to be made but our internal communication’s awful. I got frustrated, I don’t like frustration and so I joined Dogstudio as Creative Director and partner. About 8 years later, I took the position over of Gilles, one of the founders of Dogstudio, and became CEO as well. Since then, I’m constantly learning other stuff, mostly in spreadsheets.

What work are you most proud of and why?

Billy, my 15 months son. That was easy. Thank you for that. Next.

I can imagine that growing the studio wasn’t always easy, what were your pitfalls and turning points?

There are so many pitfalls. I like to think opportunities were always around the corner. Signing the Museum of Industry of Chicago was a turning point for us. We won against way bigger names, we proved ourselves we could «make it» outside of Belgium too. Creating KIKK taught us a lot about making meaningful connections, reinventing yourself, and growth in general. Never letting go and always moving forward sounds like a no brainer, but it’s not really. We always pushed ourselves and tried to innovate. I think agencies die when they stop questioning themselves. What we’re doing now is certainly not what we used to do in the past, and most probably even less what we’ll do tomorrow. I guess that’s what makes this job and this market so challenging. Keeps it interesting too. That being said, we’re still convinced quality of craft comes before pretty much anything. Ho, and don’t do drugs.

Do you have tips for anyone who is thinking about starting their own agency?

In Belgium? Don’t. The state will disgust you with taxes. Being an entrepreneur is tough and the Wallonian (the part of Belgium where I grew up) culture comes from a long history of seeing work as security. Security and quality of life. It’s partly true, partly not. That being said, I would say you have to think what you’re great at. Not what you’re “okay” at, not what you are good at, just what you’re exceedingly successful at doing, and if you’re not, put all your energy into that. The agency world had enough “generalists”. Someone told us one day that large brands will only hire the best of the best. Having access to pretty much anyone, they’ll settle for the best they can get at doing one thing or two. Not the ones which are just good at doing everything. It proved right to us so far, and we’re constantly trying to get in that place. In our situation, it’s visual excellence and meaningful & emotional experiences.

What are the challenges as Creative Director of Dogstudio?

The biggest challenge is the more you go, the less you actually design. So I spend a lot of time trying to escape everything around to keep designing and stay relevant. What’s more useless than a creative director who cannot do some hands-on work?

The world?
This year has been a turning point for us, for many reasons, both internal and external. We started interesting collaborations with five different Fortune 500 brands, which is definitely a milestone we never reached before. Made even more immersive interactive installation work. Lucky us, this is exactly what we wanted. We’re growing in the US and also started collaborating with a unicorn tech company from South America, so who knows where we might open shop next?